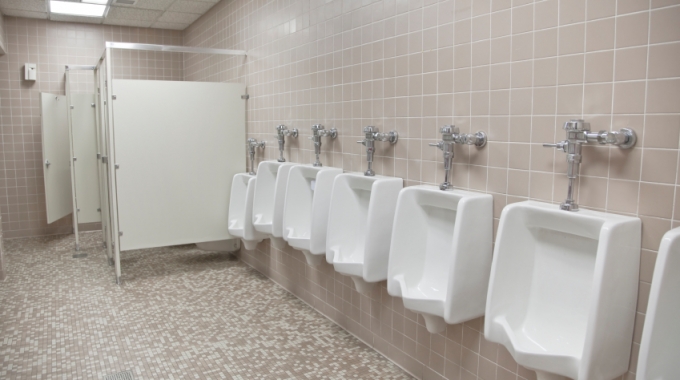 When it comes to washrooms, I have one pet PEEve (pun intended!) — urine smells. Unfortunately, it’s an issue that often isn’t due to uncleanliness: many squeaky clean washrooms often have lingering urine smells. There’s no single reason why a washroom might smell of urine. My approach? Attack it on multiple fronts!

Use a solution to attack urine buildup

We like to imagine that all urine ends up in the bowl, but this is simply not the case. If you have a restroom that’s cleaned infrequently, you’re running the risk of allowing urine to build up on the walls and floor around toilets and urinals. Yuck. The first weapon in your arsenal should be a urine eradicator: it’s a ready-to-use solution that eats away at uric acid. I like to spray this on areas that are prone to urine buildup to break down any trace amounts. It works quickly and has a residual effect to keep breaking down bacteria long after you’ve sprayed.

Even if your washroom is cleaned on a regular basis, you likely still have some work to do in order to banish unpleasant smells. In the battle against urine smells, you have one of two options: eliminate the cause or eliminate the odour.

In men’s washrooms, urinals are often the culprit of urine smells. Some gents just don’t like to flush! Luckily, there’s an easy fix for that: easily install a urinal autoflush unit on the valve to keep urinals fresh and urine-free.

Even with autoflush, some urinals can still smell. This is usually a design issue. Some of the fanciest urinals can create a lot of splash back — gross but true. That’s when I recommend a urinal screen with anti-splash fingers to reduce splash back by 50 per cent. Urinal screens are available in different scents with several options to choose from: herbal mint, cucumber melon and mango will freshen up any washroom.

Deodorizing is not just for the guys: for the ladies, choose a fresh-smelling bowl clip to keep your stalls smelling clean with each flush. Bowl clips are a low-maintenance fix for urine smells: just attach directly to the side of the bowl so it can do its job!

Sometimes urine smells can be due to airflow or a lack of airflow. Consider installing a wall-mounted deodorizer to tackle unwanted smells. The Easy Fresh deodorizer works continuously for 30 days for maximum freshness. Another great benefit? Match the scent of the Easy Fresh to the urinal screen and bowl clips of your choice. Picking one scent ensures smells are united in the battle against urine odour together, and aren’t competing against each other.

How to Clean Floors in Industrial and Commercial Facilities

It’s still chilly outside and the snow doesn’t seem to want to quit, but over…

How to Remove Salt Stains from Carpets and Floors

Well folks, winter is finally here and so is the mess that comes with it!…

About Us
Hi there, I’m Scotty McClean. I’m a proud member of the team at Glen Martin Ltd, a premier distributor of quality cleaning products in Central Ontario. I've been around the janitorial block for 40 years. I’ve seen just about everything when it comes to dirty, and I’ve used just about everything to make sure it gets clean. So, I figured it was time to start sharing my knowledge with the world. If you’re looking for advice about how to clean the peskiest places, I’ve got the answers and this is where I’ll be sharing them.
Never miss a post!
Categories
Work with a trusted, experienced janitorial supplies partner. Let’s chat.
Get In Touch
Copyright 2021 Glen Martin Limited - All Rights Reserved
Back To Top
×Close search
Search